Want the Game Vault to host your birthday party, private event or group event?  Look at our Parties page for all the info.

Also be sure to check out our Events Calendar to be sure you’re up to date on events (like cosplay), private parties (we might be closed for a few hours here and there) and pinball leagues that you might be interested in.

Our Pinball League is every Tuesday night.  Meets at 7pm  and starts at 7:30. Tuesday pinball league starts up January 7th, 2020!

JULY 14TH STARTS OUR WEEKLY PINBALL TOURNAMENT AT 6:15PM. COME EARLY TO PRACTICE AND MEET OTHER PINBALL PLAYERS. IT IS PINTASTIC!

Sunday April 12th will be our next Pinball Knockout Tournament starting at 2pm!

THIS IS A REVISED DATE

The Vault League meets every Tuesday night at 7 PM with start of 7:30.

The last Tuesday of the month is finals. There is 5 rounds each Tuesday.

You will be assigned groups and which pinball machines to play to achieve points.

Points will be logged into matchplay.events one week after the league starts.

Three weeks of qualifying 5 rounds of match play in groups of 4, 5-3-2-1 scoring. Swiss System ( winners of each round will face other winners ) Standings for individual league night results every week with prices every week.

Your best 2 of 3 qualifying weeks count for finals.

No $1 fee since we will have sponsors.

Cost is $5 for each week that will go to the weekly prize pool (top 4 will get paid ) plus entry fee to the location which will be $12 from 7 to close .

We will use MatchPlay.events for scoring.

Attend, Play and HAVE FUN!

Monday September 16th starts a Monday night league in addition to our Tuesday night league! Today is our Last Monday League due to Tuesdays popularity.

Sunday November 10th  will be our next Pinball Knockout Tournament from 2pm to 10pm. Congratulations to our winners!

Friday October 25th, 2019 is our annual Halloween Cosplay Event! 6pm to 11pm for $15 entry pass. Congratulations to our winners!

Sunday September 15th will be our next Pinball Knockout Tournament from 2pm to 10pm. Congratulations to our winners!

Sunday July 28th was our most recent Pinball Knockout Tournament! Congratulations to our winners!

Sunday, June 23rd, 2019, was our most recent Pinball Knockout Tournament! Congratulations to our winners!

Friday, March 1st, 2019, 7PM to 11PM was our first Cosplay Night of the year! Thanks to all who participated, the cosplay was amazing!

Sunday, March 24th, 2019, was our most recent Pinball Knockout Tournament! Congratulations to our winners!

We also had a pinball tournament on February 10! Thanks to all of those who participated.  Congratulations to our winners!  Thank you Hempzilla for supporting our awesome event!

Our Ugly Sweater Holiday Party was held on Friday, December 28, 2018. Thanks to everyone who joined us, and congrats to our Ugly Sweater contest winners!

All proceeds from this event were used to purchase waterproof sleeping bags to be given to the homeless to help fight off the winter chill.

Friday October 26th, 2018 was our Halloween Party and Costume Contest!

This is an all ages event to celebrate the season, compete for prizes, and play some retro games all night long at a reduced rate! Cosplay, homemade, and store bought costumes are all welcome!

Sunday, September 2 was our recent Knockout Pinball Tournament! The event was from 2pm to 10pm. Thank you to all the participants for making it a fun event!

Friday, August 24 was our Cosplay Night! Congrats winners and special thanks to our judges!

April 29th, 2018 Sunday 2PM to 10PM is our next Pinball Knockout Tournament! See you there!

Morristown Game Vault would like to invite everyone to our first Cosplay Night of the year!

This is an all ages event to show off your best cosplay and play some games at a reduced rate! Homemade, store bought, cosplay or Halloween costumes are all welcome!

This event will be from 7pm to 11pm with a special rate of $15 for the time! The costume contest itself will be at 9pm.

(Please keep all costumes family friendly, as this is an all ages event)

Cozy up with us in your favorite ugly holiday sweater December 22nd from 5pm to 9pm.

Watch your favorite holiday movies, listen to holiday music, and enjoy some hot chocolate and cookies.

Sweaters are not required, but highly encouraged.
If your sweater is the ugliest, you can win prizes in our ugly sweater contest!

And of course play retro video games all night long for only $15!

Morristown Game Vault would like to invite everyone to our last Cosplay Night of the year!

SuperHeroes Unlimited will once again be hosting our Costume Contest! This is an all ages event to show off your costumes and play games. Homemade, store bought, cosplay or Halloween costumes are all welcome!

(Please keep all costumes family friendly, as this is an all ages event)

Season Finals will be held here at Morristown Game Vault on December 3rd at 2pm!

Cosplay, store bought, homemade, and last minute costumes are all welcome. Costumes are not required but strongly encouraged. Please keep all costumes family friendly as this is an all ages event.

October 29th, 2017 is our next Monthly Pinball Knockout Tournament! See you there! (Coming Up)

September 17th, 2017 is our next Monthly Pinball Knockout Tournament

You can go play games and submit effective immediately. Finals at sunshine on Sunday October 22nd 2017.

Here are the games for this session (subject to change)

(Thanks to all who participated in our first monthly tournament this past Sunday. Shout out to the top 5 who ranked: 1st – Jason Zahler, 2nd – Alberto Santana, 3rd – Steve Zahler, 4th – Basci Dinc and Ed Zeltmann. Special thanks to Basci for organizing and Francesco and Alberto for additional help. Hope to see everyone September 17th at 2pm for our next tournament!)

New this season: playing is entirely FREE. prizes awarded only to those who attend finals. Finals will have entry fees (as high as $20 for top ranked A finalists, as low as $10 for others, and $5 for B finalists. Entry fees and league dues will be paid out in full with guaranteed money to A final 4 and B top 2, less the costs of trophies)

I submitted last sessions results expect them to post shortly. I have attached the league rules for anyone who is new or wants to look them over again. We are going to have 3 locations this season: Vault, Modern, Sunshine and the finals will be held at Modern Pinball NYC on Sunday, August 27th at 4:00 PM!
check out games lists (subject to change)
www.neverdrains.com/tristate

dont mind notations at the end of a game on the never drains site I will clean that up shortly.

Star Trek Bally is a really great game and the one at the Vault is one of the nicest i’ve seen. Same goes for the nice playing Prospector at Modern. I would hate to have to exclude them from league for an obvious reason, one that would also hinder other great games with the same possible issues in the future, how can one tell if the game has been rolled? Someone can post a picture of a low score and say they rolled it. I really like using the older games to mix it up. I spoke to Josh and have a usable solution. While these are not easy games to roll, it is certainly possible. As much as I trust you all, we cannot do honor system in this instance, and there is no guarantee there will be witnesses…so….a fun use of trying to “9 out a game” a term used for going for the machine high score for a game that can be rolled will be utilized. on these games 999,999 will be the highest possible score. Trying to achieve the highest possible without going over is actually quite skillful (see Bowen tutorial of king of steel): Meaning once you have gotten as close to 999,999 as possible you would stop shooting probably even tilt to end your game, or if you want real style points know your bonus and drain at the precise moment. If you go over without getting the picture for your submission, you’re F***ed!. Should add a fun element if anyone comes across said opportunity! 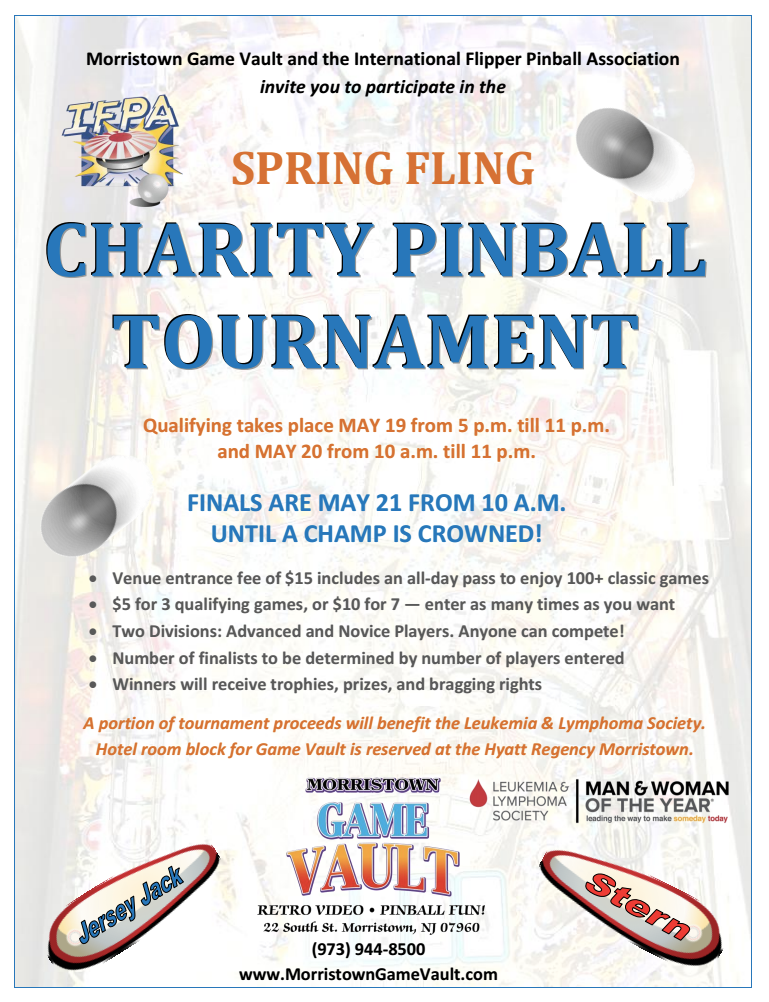 The following is the rule set for the:

Round of 40 (opening round, the top eight players receive a bye)

Round of 32 (Top eight seeded players join the finals)

Round of 4 – Grand Finals

Rulings not covered here such as malfunctions, stuck balls, player conduct, etc. will be based on the rule set of the PAPA World Championships.

Some questions and answers:

Is it possible to qualify with just one entry?

Yes. If a player gets a top-four score on one entry, they will qualify. However that player will have a poor seed for the finals based on total points earned. Play more games to increase your Best-Game (“Herb Style) point total.

Is it possible to be ranked high on the Best-Game (“Herb Style) qualifying list and not qualify?

Yes. It is possible for a player to get all 7th place scores for example, and earn a significant amount of points in the Best-Game standings. However, that player will fail to qualify for the finals since they did not get a top four score.

Is it possible to not get a top four score during the qualifying period and still end up in the finals?

Yes. At the end of qualifying, people who have multiple top four scores of the same rank will only have one counted after a random selection. Scores that are skipped from other games will cause players who are below to move up in rank, as stated above in this rule set.
—
For example: If a player gets a score ranked #8 and the top four people on that game have already qualified on another game, it is remotely possible for your score to move up four positions into the top four. This is unlikely due to the random selection of which qualifying scores players will keep, so qualify as highly as you can.
—
Note that as players scores move up in this manner, the amount of Best-Game points they have earned will not change.